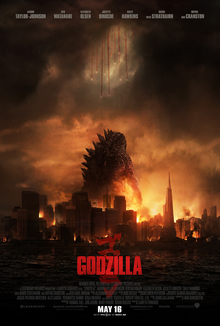 Godzilla (2014) is arguably one of the most anticipated movies of the year.

Who doesn’t want to see a giant aquatic reptile crushing buildings with a kick of his foot?!

Anticipating it and watching it are two different things, in this case. Sadly, I’d say the excitement leading to it is more fun than watching it.

I’m on the fence about this.

The plot was what it should have been: monsters destroying things; humanity is freaking out. Fine.

Characters: I saw the movie in 3D, but the characters (writing-wise) were not 3D in development. This works for viewers focusing just on the monsters: you get to know the characters well enough to explore the Godzilla vs. MUTO (the new monster) dynamic.

I think opportunities to develop characters like Ken Watanabe’s Dr. Ishiro Serizawa were wasted. For me, Watanabe’s character came across like a Japanese Shaman, not a scientist. This made him look a little ridiculous. Emotionally damaged Lieutenant Ford Brody (Aaron Taylor-Johnson) and Joe Brody (Bryan Cranston) gave the audience a good emotional window to catapult viewers into the story with.

Godzilla’s look in this movie was great. He was half B-movie era, half 2014; intimidatingly large in both height and build. As for the MUTOs, they provided comic relief. Visually, they reminded me a lot of the monsters from the Alien series, more sleek – yet starved.

With the fight scene between Godzilla and the MUTO, don’t expect too much. It was slow. Thee fight’s pacing suffered due to effect overkill: too much slow motion, fiddling with sound, and hiding the monsters’ fight in unneeded smoke and dust stole from the showdown.

Overall, Godzilla has some action, but some production choices were silly. I wish the fight scene between Godzilla and the MUTO weren’t so bogged down by effects.

Go see it if you’re excited to see monsters destroying things.  I give it a seven out of ten.

You can check out the trailer here!

Ria Renouf is an Associate Editor for BCIT’s Link Magazine. A second-year Broadcasting student, she’ll report on anything; her first loves, however, are movies, music, gaming and technology. Outside of BCIT she reads many books and cheers for the Vancouver Canucks and Seattle Seahawks. She also aspires to be a new generation’s Tintin, and does so by reporting for radio station CKNW News Talk 980AM’s news desk.

twitter.com/RiaRenouf
By Ria Renouf
previous next

The 5cs of Vaccine Hesitancy