All a Board — Ticket to Ride: Europe

In the age of first-person shooters, Annie Sheng keeps it analog with the original multiplayer mode: board games. Join Annie in her column “All a Board” and be introduced to interesting titles that go far beyond your average family fun time.

If you’ve ever walked past Strategies Games on Main Street, you may have noticed all the board games sitting behind the storefront windows. They catch my attention every time and one that stood out most to me recently featured designs and illustrations that closely resembled the covers of Harry Potter books. After eyeing the game for weeks, I finally caved in and bought Ticket to Ride: Europe.

The Ticket to Ride series is designed by Alan R. Moon and published by Days of Wonder. The original game is simply called “Ticket to Ride” and features Canadian and USA cities. There are other geographic variations in the game series, plus a number of expansion packs. My main reason for choosing Ticket To Ride: Europe was for its extra features not available in the original. The train stations made blocked routes more forgivable. The ferries add more challenge when claiming a route. And the tunnels add an element of chance into the gaming experience. In my opinion, more is better. Different people may prefer one over the other, based on gaming experience, how often they play, and the number of players per game. But having played with these extra features in the Europe version, I don’t really feel that I’m missing out by not having the original game.

A quick overview on the gameplay:

This game can be played by 2 to 5 players. To start, every player gets 4 colour-coded train cards to their hand. To claim a route on the board, users must draw additional train cards during their turn until they have collected enough cards of one colour to match the colour of the route. For example, a green route of 4 trains require 4 green cards. Locomotives are a wildcard and can represent any colour.

Every player gets 1 long and 3 regular destination tickets, and they must keep at least 2.

During each player’s turn, they must do only one of the following actions:

Players gain points with each route claimed and every destination ticket completed. Players also lose points for each train station built and any incomplete destination tickets. The player with the most number of points wins the game.

My experience with TTR: Europe

At first, the main challenge of the Europe game board was actually locating the cities. The destination tickets do a pretty good job of locating the approximate area on the map, however each city had their local names and not the Americanized spelling. It adds a cool edge which I really liked, but it also took some time to locate each city and navigate around the board. Being unfamiliar with some parts of Europe’s geography, I definitely needed a little extra time to decide which destination tickets I wanted to keep.

I’ve played this game numerous times with 1 other player, and a handful of times with 2 and 3 other players. There has yet to be a 5-player game, which I would really like to try. While playing with one other person, I noticed on many occasions when my opponent and I were so busy completing our destination cards on opposite sides of Europe, that we may never even cross each other’s paths. However, chances of route blocking will most likely happen during 3 to 5-player games.

Annie is the Online Community Coordinator for Link Magazine and a student in BCIT's New Media Design & Web Development program. She is also a BCIT 2014 grad in the Marketing Management Diploma program. Coming from a sales and marketing background, Annie has done work for start-ups and a major hotel company. Outside of school and work, she enjoys playing board games, yoga, cooking up a new recipe, trying out new craft beer, and trying to finish up a painting that's been in progress for nearly two years. 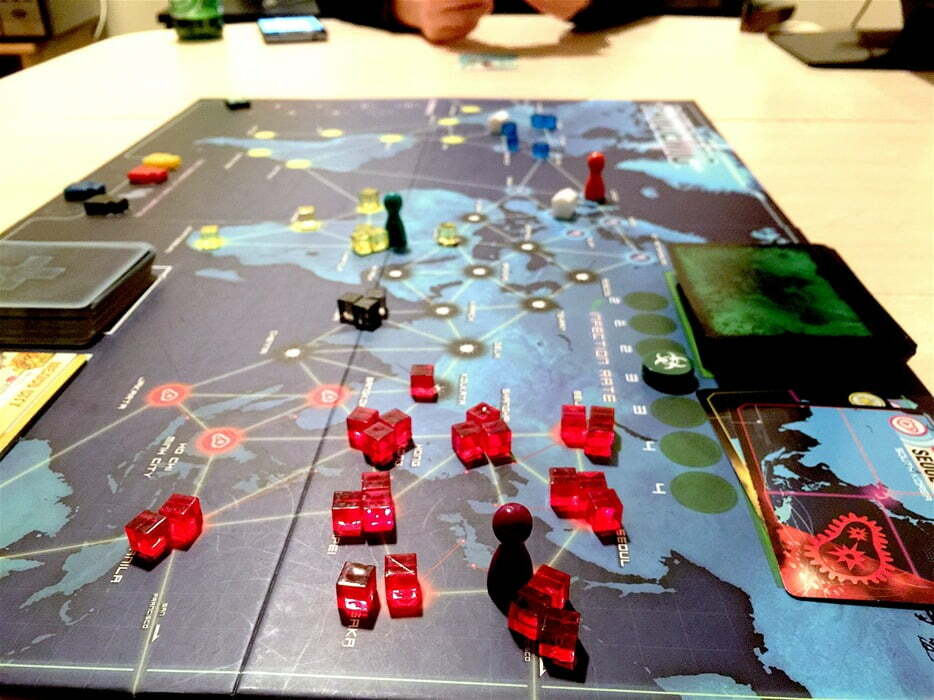 All a Board: Pandemic

All a Board — Exploding Kittens + 1st Expansion Pack!