Super Troopers 2: The Time is Meow! 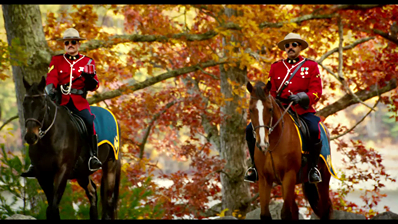 I remember Super Troopers being one of those cult films where popularity spread by word-of-mouth. In the earlier days of DVDs, Super Troopers was always the film that you heard about from a friend. “Hey man, you should check out this cop movie where this naked guy wears a bullet-proof cup,” is one such recommendation I remember. But now, after seventeen years and thanks to one of the most successful crowdfunding campaigns ever, the moustache rides again… finally!

If you were a fan of the original, then you will definitely be splitting a gut with this one. The original cast is back along with some supporting characters that help cement this as a true sequel, and the antics are zanier than ever. Plus, as a Canadian, this film allows us to get an ever better angle on the jokes between the Canadian Mounties and Vermont highway cops.

It goes like this: The Spurbury officers find themselves out of police work after an incident with a celebrity (I won’t spoil here). However, thanks to their old captain John O’Hagen (played by Brian Cox) Thorny, Rabbit, Mac, Foster, and Farva are getting another shot as cops. The plot focuses on a border discrepancy that has placed a fictional Quebec town in the state of Vermont. It’s the job of the Super Troopers to replace the Canadian Mounties and help the town transition to becoming Americans. However, it doesn’t go super smoothly, and soon, antics ensue between the boys and the Canadians. It was actually one of the best surprises to see how funny the Mounties actually were with their over-the-top Quebecois accents and their Canadian stereotypes.

Rob Lowe educates the boys about Canada by playfully tugging some man sausage and treating it like a mini punching bag.

Stand out performance goes to Mountie Archambault portrayed by Vancouver’s own Will Sasso. Additionally, Rob Lowe is hilarious as the Canadian small-town mayor, Guy LeFranc. One of the unexpected highlights of the film, catching the audience off-guard, was a scene in a bordello where Rob Lowe educates the boys about Canada by playfully tugging some man sausage and treating it like a mini punching bag. 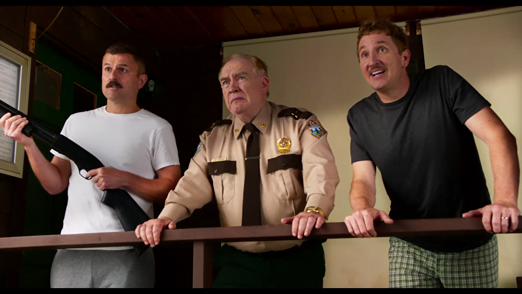 The film, technically, starts out rather strong. There are good action sequences and an awesome chase scene that really sets the pace of this film. It has great camera moves and makes a lot of jokes through movement and timing. This is actually refreshing, because even blockbuster movies are guilty of lazy film-making with respect to comedies.

Many modern comedies often consist of moving from set piece to set piece for more improvised dialogue. Here, many of the jokes are visually funny as well. It adds to that zaniness when the characters are not just saying funny things, but doing them as well. The writing is also very strong, since the boys of Broken Lizard are the writers as well as the stars. Their jokes feel like what their characters would say and that adds to their personable feel.

The banter between the boys delivers a joke juts about every five seconds. In particula Farva, who everyone loves to hate, is even more of of an oddball this time around. He is a constant source of jokes, and even though he’s like the one idiot in a group of friends, he has carved out a good place in this troop. 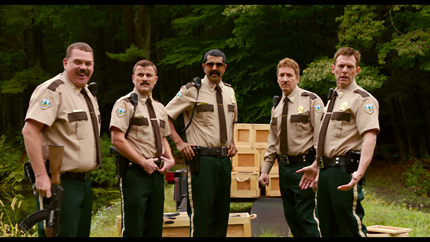 Broken Lizard’s wheelhouse often involves funny foreigners, so its great to see Canadian (particularly Francophone culture) being joked about with such detail. On the surface it may seem like a South Park-ian attempt to poke fun, but in reality, they give the Canadians a lot of credit. When they make fun of them, the canucks often retort with an equally good joke on the Americans. Jokes include: bragging about health care, better beer, the metric system, and better strip clubs.

The theater I sat in was filled with uproarious laughter throughout most of the film. At one point I thought I was going to choke. So many of the jokes caught us off-guard and I’ll bet that this movie will be quoted ad nauseam for years to come. I’ve seen many reviews for this film being critical, but those sentiments seem to be largely fuelled by an aversion to the lowbrow antics that the Broken Lizard comedy troupe is known for. However, everyone in my theatre was laughing throughout, and laughs are as good as facts. Funny is funny.

Rest assured, this is not one of those sequels that disappoints (looking at you Dumb and Dumber Too…). Take some friends, buy a litre of cola and just have a fun time. It’s fun and wacky yet the characters are very personable. If you loved the original, you’ll be even more impressed this time around, and chances are your face will hurt.

Super Troopers 2 in in theatres meow!

The Super Troopers are are back and there are more antics than ever!
(Courtesy: Fox Searchlight Productions)