Consider this the Finnish spring break – but with less sun and bathing suits and more Saunas and negative temperatures. I’ve got the week off of school, and since I’m still on a mission to see all the Nordic countries while here, three of us booked a trip to Oslo for five days. We had a great time despite the weather, so here’s a recap of what Norway’s capital had to offer.

This was my first AirBnB experience, and I think I might have set the bar a little too high. We stayed in Grünnerløkka, just a 15-minute walk northwest of the city center. Our apartment was a cute little place owned by a very down-to-earth French guy. We never got to meet him, since he wasn’t in town to let us in and had to do it all “remotely” through the intercom (which was a fun and interesting challenge when we arrived) but we got the impression from the homegrown veggies, hippie-soap, homebrewed beers he left us as a welcome present, and the Ghandi and Dalai Lama quotes hung on the walls. It was pretty great to have a full apartment, it really helps to feel like a local and experience the city in a real way. Our view looked over Sofienbergparken and we were walking distance from practically everything, which is always the best way to see a city. Plus he had a guitar I could play – so I was happy. We did have to do a bit of a relay race at the end to get out of the place though – we had to drop the keys in his mail slot before we left, but we needed the fob to open the front gate from the inside. So we had to strategically place ourselves to hold the doors open, scan he fob to open the gate and then run as fast as we could back into the apartment building to drop the keys and the fob into the mail slot and then run back to the gate before it closed again – locking us in. We made it out literally just in time; it closed right behind us. Phew.

That almost sounds like a band name. This was the only downside to our trip, and I wouldn’t even call it a downside, more like a challenge. Practically everything in Oslo was closed for Easter Weekend, which we hadn’t even realized was the weekend we were travelling, we had just gone with the cheapest flights. So all day Sunday and all day Monday not even the grocery stores were open. Luckily we arrived Saturday morning – so we got all our shopping done early and spent the two days where everything was closed exploring all the free outdoor attractions and a few of the museums that were still open. As for the weather? Rain can’t stop a BC native.

The City of Statues 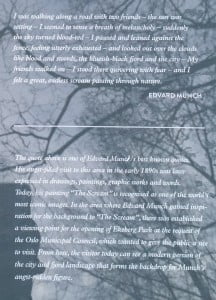 If this isn’t the city’s slogan – they should seriously consider it. I have never seen so many statues in my life. There are two full parks dedicated entirely to statues, which, don’t get me wrong, were absolutely beautiful and I really enjoyed exploring them, but the statues don’t stop there. Every open space has a statue in it. The front of every official building has a number of statues in front of it. There were even statues in the backyards of regular houses along the train routes we took. I guess there’s a lot to commemorate when your city is closing in on its 1000th birthday.

There are two main sculpture parks in Oslo. Vigeland Park is the world’s largest sculpture park made by a single artist. It houses over 200 sculptures in a number of mediums. Ekebergparken is a statue park located on a hill in the southeast of the city. It has a beautiful view of the city from the top and contains the path that Edvard Munch walked along when he got the inspiration for his famous painting The Scream. It contained scultpures from artists new and old – including famous classics like Salvador Dali’s “Venus De Milo with Drawers” and many from Pierre-Auguste Renoir and Auguste Rodin.

Roaming rather aimlessly around a city can be a great way to discover its charm along with its notable sights. During our four full days we spent a lot of time walking from place to place, which allowed us to see different neighbourhoods. Some quiet neighbourhoods lined with old colourful houses nestled together with cobblestone pathways lined winding between them. Others with charming little shops and cafes and patios littered with people under blankets drinking coffee and watching the world pass by. Our routes also crisscrossed the more populated areas like the National Theatre, the Oslo Opera House, the city centre, Karl Johans Gate, the Royal Palace, and the Akershur Fortress and Castle.

As the capitol of Norway, Oslo has its fair share of museums to offer. Due to our short stay we had to pick a select few to visit. Our final choices were The Munch Museum, The Oslo City Museum, and The National Gallery.

The Munch Museum was the one I was most looking forward to and the one I enjoyed the least. Haven’t I written about managing your expectations before? I expected the museum to be entirely dedicated to Munch’s work with a large collection of his paintings – after all, its brochure boasts about owning two original versions of “The Scream”. Instead, the museum’s only exhibition was a comparison between Munch’s work and the work of American photographer Robert Mapplethorpe. I didn’t enjoy the vast majority of Mapplethorpe’s work and felt the comparisons between many of the pieces were a stretch. It greatly detracted from the few pieces of Munch’s work that were on display (none of which were The Scream).

The City museum was free and right next to Vigeland park, which made it a clear choice for three Students in one of the world’s most expensive countries. It was small and quaint and had some interesting pieces and stories about the history of the city.

The National Gallery was a choice after the disappointment of the Munch Museum. The Gallery owns the most famous version of The Scream (Munch actually created four versions of The Scream three of which are painted) as well Madonna and a few other famous paintings. They had many other great paintings and works of art from as early as 300 B.C. Many were Norwegian, but other notable artists included Manet and Picasso. It was a nice collection and wasn’t a busy gallery, which made taking our time to take in the many pieces that much more enjoyable.

Just because we’re poor students doesn’t mean we can’t class it up now and again. One of the Norwegian National Opera’s four performances of “Elysium” – a modern opera set in a future time on earth where there are but 40 humans left, isolated on a island from the planet’s now advanced race of beings – fell on our last night in Oslo. We bought some of the cheap seats with a decent view for roughly 20 Euros. Lucky for us the place didn’t sell out and the usher showed us to better seats before the show started. The opera itself was pretty good, probably a strange choice for my first experience but enjoyable nonetheless. Impressive vocal ranges, creative orchestral arrangements, and unexpectedly cool Tron-style light up suits. The building itself is equally beautiful – with a marble exterior and the opportunity to walk on the slanted roofs.

On our final day we caught the train up to Holmenkollen, a hilly suburb on the west side of the city. It’s home to the Holmenkollen Ski Jump, a famous Norwegian Ski Jump. It hosted the 1952 Olympics, Nordic Ski championships, and is home to an annual Ski Festival. For 130 Krones we took an elevator to the top and were graced with our first afternoon of sunshine looking out over the city of Oslo below us. It was also home to the Norwegian ski museum, which featured some very impressive videos of skiing in the Nordic backcountry.

I obviously recommend Oslo to anyone who has the opportunity to visit. I’m sure it only gets more beautiful in the summertime with a bit more sunshine and warmer weather. I can imagine the parks and public spaces being a great way to spend an afternoon in the summer. Keep an eye on your money though, as it goes quickly – and the conversion is tricky.